Today we are going to talk about trading long positions. When I say long positions, I mean positions that last longer. I always discourage traders from taking short positions even if trading options. For example, if you enter a 1-minute trade, a 2-second price fluctuation can result in a losing trade.

But what if the trade was to last 5 minutes, or even 30 minutes? It's very unlikely that the 2 second or even 10-second fluctuation would have changed the trade much. Another reason why I discourage holding a position over a short time frame is it's harder to analyze the markets over a short amount of time and make a good trading decision.

What is long and short position in trading?

With that out of the way, holding the position for longer time intervals doesn't guarantee that all your trades will be winners. But you've increased the probability of getting more winners just by holding positions longer.

Now let's increase this probability further by introducing a set of technical analysis tools; the Simple Moving Average (SMA) and the support and resistance levels.

SMA is a trend following indicator. This indicator is formed by calculating the average price of the underlying instrument over a predefined number of time intervals. It's worth noting that the SMA doesn't predict the direction of the trend. This is because it has a lag due to the fact that the average prices are calculated from previous prices.

To set up this indicator, log into your trading account and set up your chart. Next, click on the indicators feature and select moving averages. Finally, select the moving average.

The moving average window will pop up. Click on the setup and apply tab. Change the period to 10 and the type to SMA. Click on apply. 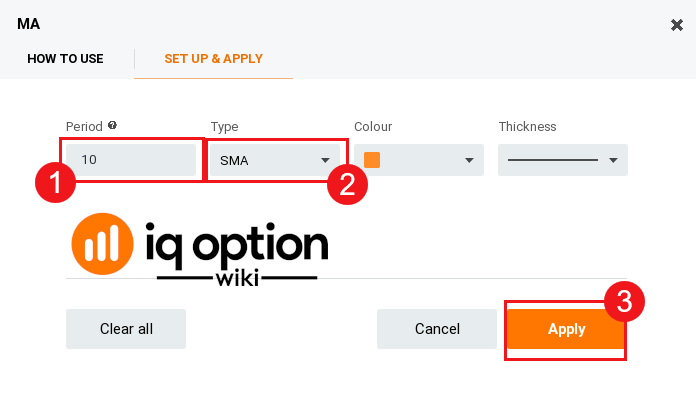 In our trading example, I'll use the SMA10 and SMA30 indicators. To set up the SMA30, repeat the steps above. The only changes you'll make are the period changing it to 30 and the colour-changing it to blue.

With your SMA indicators set, the next thing you'll need is to create the support and resistance lines. To do this, click on the graphical tools feature (right below the indicators feature). Select line.

How SMA10 and SMA30 work alongside support and resistance

When the SMA10 (orange) cuts across the SMA30 (blue) from below and moves above it and the gap between both starts to widen, an uptrend is developing.

When the SMA10 cuts the SMA30 from above and moves below it and the gap between both starts widening, a downtrend is developing.

If both SMA10 and SMA30 keep intersecting each other and the gap between them remains narrow, the markets are ranging.

But this alone isn't enough to know when to enter a long position. You'll need to employ the use of support and resistance. Only open a long position when both SMA10 and SMA30 cross the support or resistance line and the gap between them is widening.

How do you make money trading long positions using SMA(10/30) with support/resistance?

The first thing to remember is you want to trade with larger time intervals. So avoid using 1-minute candles. I recommend 5-minute candles. This way, you will be able to open positions lasting 30 minutes or more. This is what we call trading long positions.

From the image below, the prices break the support line and start falling. In addition, the SMA10 has cut the SMA30 from above and is moving below it. The gap between both starts widening. At this point enter a long sell position. Since each candle has a 5-minute interval, you can open a long sell position lasting 30 minutes or more.

In the image below there are 3 resistance levels. The trend is going up. Once the price breaks the resistance level, you'll notice that the SMA10 cuts the SMA30 from below moving above it. In addition, the gap between them widens. This is a signal to enter a long buy position of 30 minutes or more.

How do you make money on a long position?

Long transactions naturally require more time. Not for analysis, because that won't take long. It will take longer to wait for the effect of the trade in terms of profit or loss. So you could say that with today's strategy you need one very important element in trading, which is patience. It is crucial. This is why we open a position for 30 minutes, in order to eliminate any corrective movements that might happen on the way to the target. This objective is, of course, for the price to move in the direction we set up in the trade. Of course, patience alone will not make every trade profitable. However, patience will help eliminate the noise in the directional movement of the price and give it enough time to make a move that can bring us profit.

What is riskier a long or a short position?

Using the nomenclature used in today's article, remember that we are referring by these terms to the length of the transaction. This length can be defined by the time a CFD or forex position is open or the set time for a binary or digital option to expire. With this in mind, short-term positions are riskier in nature. Remember that the market does not just go up or just go down. There are bound to be small corrective moves down along the way up. With short trades, it may happen, for example, that we have judged the direction of the market well and it goes up, but it may then happen that a temporary correction in the short term makes it impossible to make a profit. A long-term trade would work better in such a case.

SMA10 and SMA30 can be used together to predict an upcoming trend. They simply intersect each other and the gap between them starts widening. However, if you add support and resistance levels, you can be sure that the trend has finally developed and it's time to enter a long position.

Now that you've learned how the SMA and support/resistance work when trading long positions, try it out in your IQ Option practice account. I'd love to hear your results in the comments section below.